This is the final part of the series where we build a multicompartment cell and evolve it into a network of cells running on a parallel machine (which is basically all computers made within the last decade). On this page, we translate the classes we have previously constructed so that they operate in either a parallel or serial mode.

Note: If you followed the Quick Start instructions on the NEURON website, you should have everything you need to run parallel simulations. If not, if you do not already have an MPI installation, go to that link and follow the instructions in “Step 4: Install MPI to enable parallel simulations.” If you compiled NEURON yourself instead of using an installer (this is almost-never necessary), this part of the tutorial requires you to have used the --with-paranrn flag at configure time.

Parallel communication takes place via logical events in network connection objects known as NetCon. NetCon sources are threshold detectors. They monitor some variable, say the membrane potential of a cell, and when the variable reaches some threshold, it triggers an event sent to the targets. Targets are frequently synapses on other cells. When they receive the event, they activate.

In a parallel context across several machines, communication between hosts can be computationally inefficient when the frequency of events is high and when the message being sent is large. NEURON uses an efficient priority queueing mechanism to deliver events to targets after the delay specified by the NetCon. The message passed is succinct. It is an integer, the unique global identifier (gid) of the source. The following two figures illustrate these ideas and come from Hines M.L. and Carnevale N.T, Translating network models to parallel hardware in NEURON, Journal of Neuroscience Methods 169 (2008) 425–455. Users should also consult the ParallelContext reference. 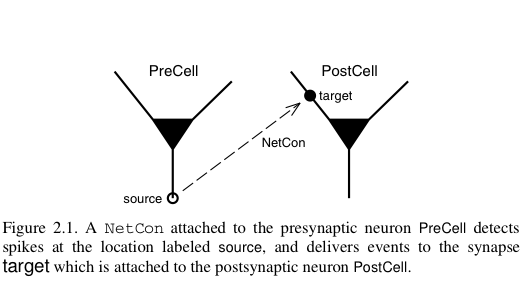 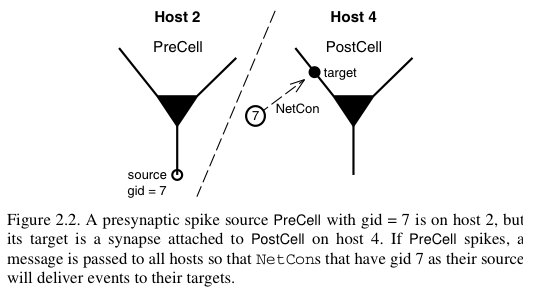 The main step involved in making a parallel implementation is to assign the global identifiers across the various hosts. Care should also be taken to assign cells to the various hosts such that the system is load balanced. For example, in a network with computationally complex and simple cells, several simple cells may be assigned to a host while few complex cells may be assigned to another host.

Once again, parallel NEURON requires MPI support. If this is your first time using it in a while, you should test your computer setup.

Run the script in parallel via e.g. mpiexec -n 4 python testmpi.py from the command line in a terminal. You should see output resembling:

These could appear in any order since in theory they are running simultaneously but must print out in some order. If instead you see four processes claiming to be 0 of 1, then your copy of NEURON was not compiled with support for parallel simulation. Reconfigure with the --with-paranrn flag, recompile, and try again. If you get an error saying that mpiexec is an unknown command, then MPI is either not installed or not on your PATH; correct your MPI setup and try again.

Back to the example

Begin by downloading ballandstick.py into your working directory. This is equivalent to the classes we created in the previous part of the tutorial.

We will construct a ring.py based on the previous Ring class. Changes are indicated with ###:

The call to h.nrnmpi_init() must happen before any use of the ParallelContext class – which forms a key part of any NEURON parallel simulation.

The only conceptually new method here is the set_gids method where each process specifies which cells it will simulate. Here we use what is known as a round-robin approach, where the pc.id()th process starts at pc.id() and skips by however many processes are running (pc.nhost).

In _create_cells, we now associate the cell gid with the NetCon _spike_detector. This allows the _connect_cells to make connections based on gids instead of objects, using pc.gid_connect.

The code above should look very familiar.

The conceptually new pieces are:

Start by testing this without using MPI:

And once you are satisfied that works, you can try MPI, e.g.

Our above test runs the simulation successfully, but in the end, no single process knows when all the spikes occurred. There are a number of ways to deal with this: one solution is to have each process write its data to a file. Instead, we will use pc.py_alltoall to send all the data to node 0, at which point node 0 can plot the raster, save data, or whatever.

Running this via e.g. mpiexec -n 2 python test_ring2.py displays the familiar raster plot. If you are wondering why node 0 was the one chosen to make the plot, it is because that is the only node that is guaranteed to exist (nothing else exists if there is only one process being used for the simulation).